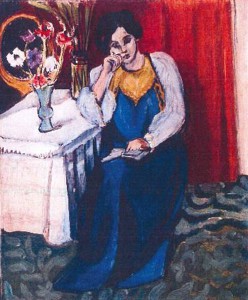 Works by Henri Matisse are believed to be among the 1,500 found in the basement of a Munich man.

A trove of 1,500 works of art plundered by the Nazis has been discovered in Munich, according to a German news magazine report — a collection that, if confirmed, ranks among the most significant artistic finds of the postwar era.

The cache of modernist masterpieces looted in the 1930s and 1940s is believed to include priceless works by Henri Matisse, Pablo Picasso, Paul Klee and Marc Chagall, the German news magazine Focus reported.

Nearly all the recovered pieces were considered lost — until now.

The ill-gotten artworks, which would have been deemed “degenerate art” and confiscated from Jewish collectors by the Nazi regime, eventually made their way to a German art collector, Hildebrand Gurlitt, according to the Focus report.

When Gurlitt died, his son Cornelius inherited the spoils — apparently unaware of the art’s origins.

Authorities were drawn to 80-year-old Cornelius Gurlitt in 2010 after an inquiry into his finances, Focus reported. Additional police probes led to a raid on Gurlitt’s residence in 2011.

That’s when authorities found a massive collection of pieces by some of the world’s most celebrated and revered artistic giants.

The younger Gurlitt had apparently kept the works hidden in darkened rooms, selling a painting every now and then when he needed a cash infusion, Focus reported.

International warrants were out for at least 200 of the prized works, according to Focus, adding that the recovered collection is being stored in a secure warehouse in Munich for the time being.

Although the artworks were found in 2011, Germans customs officials may have been keeping mum on their discovery in the intervening years due to the diplomatic and legal complications stemming from the loot — particularly claims for restitution from across the globe, according to the Guardian, a British newspaper.