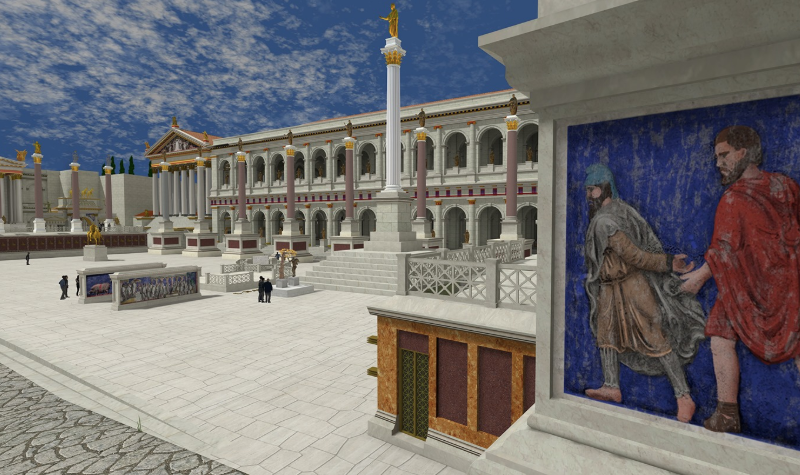 You can take an aerial tour of the city circa 320 A.D. or stop by specific sites for in-depth exploration

Ever wish you could step into a hot air balloon, travel back in time to 320 A.D., and soar over the streets of Ancient Rome? Well, that oddly specific fantasy is achievable in a new virtual reality experience called “Rome Reborn.”

The ambitious undertaking, painstakingly built by a team of 50 academics and computer experts over a 22-year period, recreates 7,000 buildings and monuments scattered across a 5.5 square mile stretch of the famed Italian city. The project, according to Tom Kington of the Times, is being marketed as the largest digital reconstruction of Rome to date.

Director Bernard Frischer, a digital archaeologist at Indiana University, tells Agence France-Presse that “Rome Reborn” features multiple VR experiences: You can opt for a whirlwind flyover tour of the city or stop by a specific site, such as the Roman forum or the Basilica of Maxentius.

For now, the forum and basilica are the only two landmarks available for in-depth exploration, but tours of the Colosseum, the Pantheon and other top attractions are expected to debut this year or next.

The “Flight Over Ancient Rome” experience, currently available via VR headsets and computers, takes participants on a roughly two-hour highlights tour that includes stops at more than 35 points of interest, including the imperial fora and palace, the Circus Maximus, and the tombs of emperors Augustus and Hadrian. All of these sites are seen from above, providing a unique aerial perspective the website touts as a chance to see “how the individual buildings and monuments fit into a larger pattern of urban organization.”

Comparatively, the two site visits place users in the driver’s seat, affording them freedom to roam through reconstructed streets and halls while learning key facts via a helpful in-app tour guide. The Basilica of Maxentius, a monumental civic building commissioned by the emperor Maxentius prior to his defeat at the hands of rival Constantine, is particularly impressive due to its vibrant interior and restored statue of the conquering emperor, who later oversaw the Roman Empire’s transition into a Christian state.

The Forum, a marketplace of sorts that served as the center of the ancient city, also reveals an impressive attention to detail: As archaeologist Paolo Liverani of the University of Florence explains to the Times’ Kington, researchers used studies on the flooring of the Forum—including an illustration found on the Arch of Constantine—to render the virtual model accurately. VR experts even collaborated with historians to ensure that sunlight correctly bounced off of the Forum’s gold-gilded statues.

Frischer tells AFP that he and his colleagues chose to set their virtual world in 320 A.D. because they had the most information on that period, which allowed them to go into greater detail. Additionally, he explains, the year represented a critical turning point for Rome, as it experienced a burst of architectural energy and saw its population cross the 1 million threshold. Just 10 years later, Constantine moved the imperial capital east to Constantinople, signaling the end of Rome’s position as the center of the empire.

Today, little of the sumptuous world seen in “Rome Reborn” remains, a fact emphasized by the app’s “Time Warp” feature. By toggling between the structures’ past glory and present-day dilapidation, history lovers gain an even greater appreciation of just what was achieved during Rome’s glory days.

Link to the article