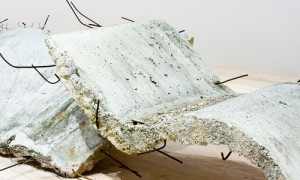 North Adams, MA – MASS MoCA celebrates the opening of a new, long-term Anselm Kiefer exhibition, in partnership with the Hall Art Foundation. As is its tradition, the opening of the new building will be celebrated with free admission to all MASS MoCA’s galleries on opening day, Friday, September 27, from 11am to 5pm. A free, public tour of the exhibition will be offered at 2 pm.

Anselm Kiefer, who first visited MASS MoCA in 1990 when it was still in the early planning stages, ranks among the best-known and most important of post-World War II German artists living and working today. Kiefer’s works are often realized in large formats, which in turn demand special exhibition spaces, as with this installation. Works exhibited will include Étroits sont les Vaisseaux (Narrow are the Vessels) (2002), The Women of the Revolution (Les Femmes de la Revolution) (1992), Velimir Chlebnikov (2004), and a new, large-format commission created by the artist specifically for the installation.

The exhibition building will be open through mid-late November, and will re-open on April 15, 2014. Regular admission to the Anselm Kiefer installation is included with gallery admission.

For more information about The Hall Art Foundation, visit: http://bit.ly/YqhnG3.