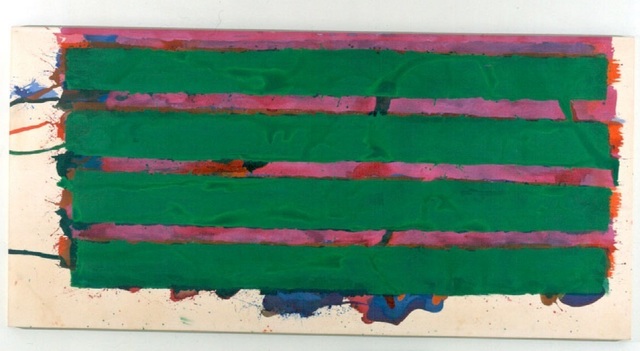 Tecumseh by Edwin Ruda was completed in the year of 1969. His acrylic painting depicts four very strong, even green lines spread horizontally across on the canvas, without actually reaching either end of the canvas. The layers under the vibrant green lines are mixings of purple, blue, red and orange to create a contrasting fuschia color. Sparingly splattered blood orange paint around the edge of the canvas, with a few drips of color rolling out of frame. It is still so strongly reminiscent of the American flag while only possessing one small quality the flag has, the 13 colonial lines. And even then, it only represents four lines, which may or may not tie in with the man the piece is named after, Tecumseh. Tecumseh was a Native American Shawnee warrior and chief. He is one of the most respected leaders in Native American history due to his courage to stand against white settlers from invading their land and his firmness to never back down. Tecumseh was one of the only tribe leaders unwilling to sign the Treaty of Greenville in 1795, leading to 17 years of fighting between the Shawnee tribe and white settlers. Tecumseh reached a boiling point in his frustrations in 1810 when the Treaty of Fort Wayne was established. Tecumseh was outraged and joined together an army of 400 men to meet President Harrison in Vincennes, Indiana. In Ruda’s piece, Tecumseh, the earthly green lines remind me of the environmental spirituality that the Native American people would exhibit, and their strength, and their unwillingness to be undefeated. Tecumseh’s whole reasoning behind his distaste towards the white invaders was because they stripped the first Natives of their tribal values and spirituality. They took over the land and changed it. They took over the people and changed them. They took over everything. The same as those flag stripes we all recognize so easily because they dominate us. Ruda was able to create a beautiful piece that outwardly called out the wrongs with the dark truth of American history that is never talked about, or taught, or discussed. He is able to speak on these issues while still maintaining contemporary art values in his work, it truly is a beautiful piece to have hung in the main walking wing under the government offices in Albany, New York.