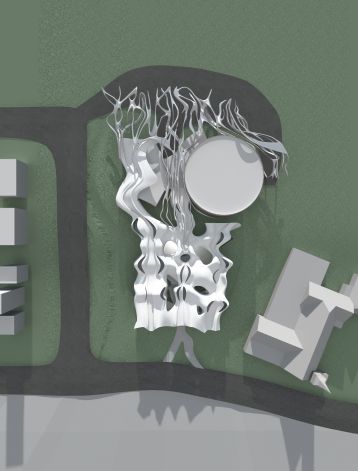 Article from the Times Union,

The designs are flights of fancy of fancy — swirling confections of white and light and shadow, some resembling spiky alien landscapes. One might be an offshoot of the Guggenheim in Bilbao. Another unspools like a ribbon.

All are visions of a wildly transformed miSci, the museum of innovation and science now housed in a 1969 pie-shaped structure (with a saw-toothed 1991 addition) overlooking downtown Schenectady. Completed by roughly 60 second-year students in Rensselaer Polytechnic Institute‘s five-year architecture program, these digital images and 3D models — many of them now on display at the museum — aren’t so much pragmatic building plans as idealistic what-ifs meant to spark the undergraduate imagination while cooking up fresh ideas for some future renovation and expansion of the increasingly busy, forward-tilting miSci.

“This was the first building they’d ever designed, and I think the work that came out was absolutely remarkable, given where they were in their education. This would be a challenging project for professional architects,” said Evan Douglis, dean of architecture at RPI.

Calling them “speculative windows into what an architect could accomplish as a transformative vehicle,” Douglis said he hopes the students’ work will “raise awareness, in the general population, of the importance of miSci — and also the value that the architect plays as being an agent for change.”

Viewed one Friday afternoon alongside William “Mac” Sudduth, miSci’s executive director, the future looks like this: sweeping, fantastical, nervy. “It’s their first project. So they’re not architects — I mean, they’re dreamers,” he said.

Over here, a model resembling a pointy ancient rune. Over there, a beached whale skeleton.

Sudduth took a look at it, absorbing the analogy. “Or maybe a porcupine,” he countered.

The spiny rodent came up again while discussing Vale Park, which abuts the museum — and which Sudduth hopes to utilize when the institution expands, perhaps in five years, to accommodate swelling numbers.

Thanks to new exhibits featuring such crowd favorites as butterflies and dinosaurs, this year’s attendance figures are on track to hit 100,000, he said. The neighboring park has “a pond, and nature, and deer, and porcupine, and all that kind of stuff — and we’re a science museum.”

The students zeroed in on another major design concern: miSci’s need to expand its reach and visibility in the community at large, literally as well as figuratively. From its lofty perch on Nott Terrace Heights, visitors can see downtown Schenectady — but downtown Schenectady can’t look back. The museum is hidden from view.

Addressing this point, many students revamped the entrance; some imagined the structure extending down the hill; all fancied a building so architecturally conspicuous, so striking on the outside, that patrons would be lured inevitably inward.

Jacob Wigton, an RPI student from Jamestown, R.I., recalled his first visit to the museum early last fall. “My first thought was, ‘Where is it?’ Because when you’re approaching the building, when you’re driving up, you really can’t see it all,” he said.

His plan for miSci includes “a pretty elegant swoop from the original building toward the street. … The idea is, it kind of creates a connection between the museum and the edge of downtown.”

The idea for the RPI-miSci partnership was first lobbed by Neil Golub, Price Chopper’s executive board chairman, whose wife, Jane, is on the museum’s board of trustees. Douglis said the concept proved a natural fit with the school’s Capital Region Collaborative Initiative, which previously set students to work on designs for the Shaker Museum in Columbia County and the Hyde Collection in Glens Falls, and a good one for miSci, which was founded in 1934 and holds, among other things, the archives for General Electric.

Students made light studies, visited the museum, absorbed its history and mission, comprehended its needs and then realized their visions using an animation program and, for the models, a 3D printer.

The structure “really needs something modern added to it. … It’s essentially a cylindrical brick building with an eccentric addition added on, and there’s not a lot of space,” said Dillon Webster, a student from Seattle whose curvy conception for the building is drawn from sine waves. He based them on his early light studies — which seemed apt, he said, given the work of Thomas Edison housed in the museum.

Webster’s plan also includes a gift shop and restaurant accessible to non-ticket holders, ideas that Sudduth likes: Anything that brings bodies up the hill and into the museum will raise its profile and presence in the Capital Region and beyond. While budding architects focus on the outside of museums, Sudduth focuses on the inside.

“Architecture’s really the meeting of art and science. You know, truth is beauty, beauty is truth — that kind of thing. I think (the students) learned a lot from us, and we learned some things from them,” he said. “And so I think it always helps to sort of dream and say, ‘What can we do?'”