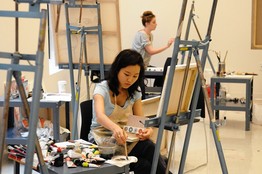 For graduates, job prospects and satisfaction are surprisingly high

Think that art school dooms graduates to a life of unemployment? The numbers paint a very different picture.”Artists can have good careers, earning a middle-class income,” says Anthony Carnevale, director of Georgetown University’s Center on Education and the Workforce. “And, just as important and maybe more, artists tend to be happy with their choices and lives.”

A 2011 report from the center found that the unemployment rate in the first two years for those graduating with bachelor of fine arts degree is 7.8%, dropping to 4.5% for those out of school longer. The median income is $42,000.

“Artists’ income is comparable to other liberal-arts majors,” he says. “They do a little better than psychology majors, since counseling and social work is a very low-wage occupation.”

For artists who go on to graduate degrees, the most common of which is the master’s of fine arts, the unemployment rate for recent graduates drops to just under 5%, and their median yearly income increases to roughly $50,000.

Other studies have also found relatively high levels of employment and satisfaction. The Curb Center for Art, Enterprise and Public Policy at Vanderbilt University conducted a survey of 13,000 graduates of visual and performing college-arts programs between 1990 and 2009; 2,817 were in the fine arts.

Among the findings: Almost 83% worked the majority of their time in some arts occupation, such as art teaching or in a nonprofit arts organization.

“Arts graduates are resilient and resourceful,” says Curb Center Associate Director Steven J. Tepper. Sixty percent of the fine-arts graduates in the survey work more than one job, he says, “but they are happy with what they put together.”

Bruno S. Frey, research director of the Center for Research in Economics, Management and the Arts at the University of Zurich, echoes that finding. 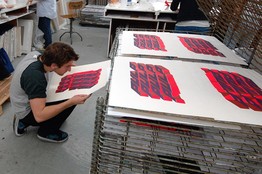 He says he has done “happiness research for some time” and found that “artists generally are happier than the rest of the population.”

Of all arts professions, fine artists, writers and composers were found to be the happiest, because “the profession they have chosen gives them autonomy, and that makes them happy,” he says. “Actors and musicians, on the other hand, are less happy, because they are disciplined by various rules and have less autonomy.”

Mr. Grant is a writer in Amherst, Mass. He can be reached at [email protected].